Rejoinder to They grow fast and easy but do Miyawaki forests meet the fundamental principles of ecological restoration by Nikhil Eapen, The Hindu, 3 April 2022 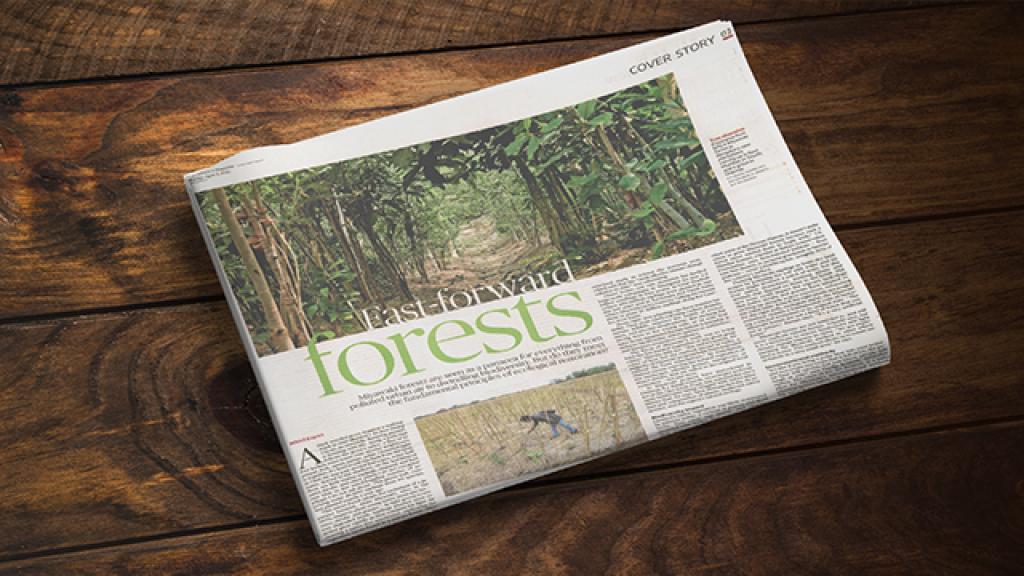 The Hindu article on Miyawaki forests by Nikhil Eapen 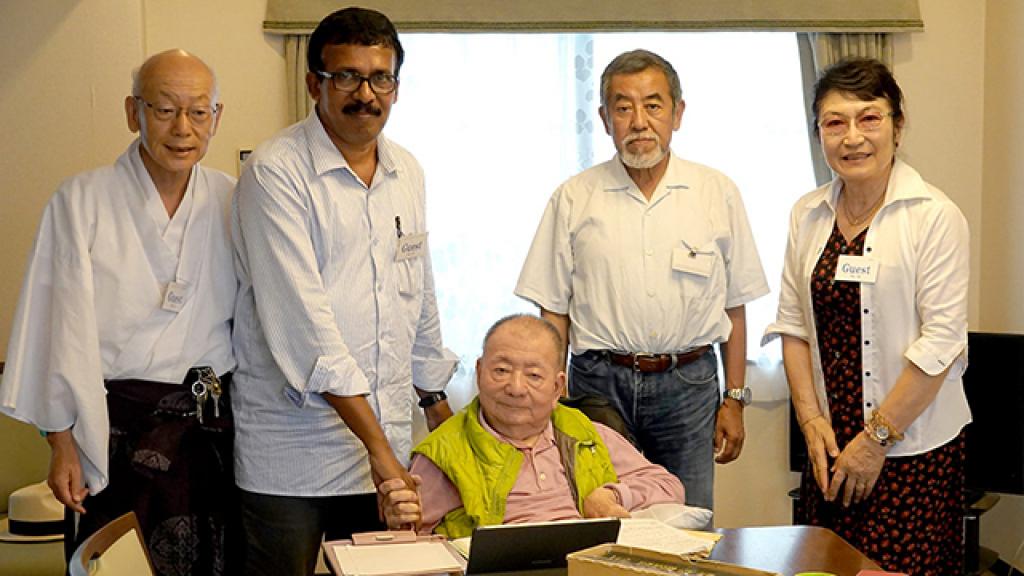 M. R. Hari with Prof. Dr Akira Miyawaki and his team in Japan 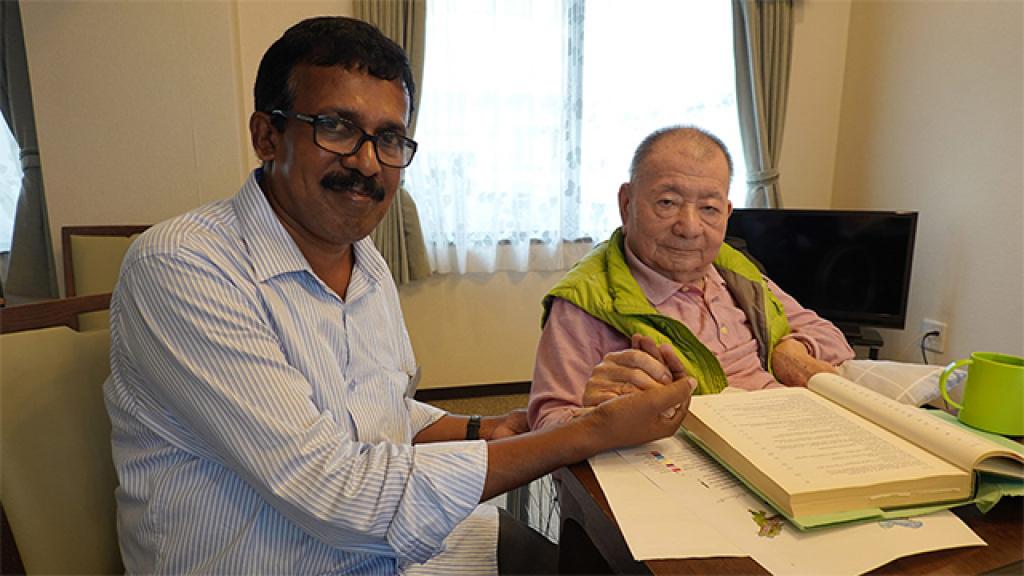 My childhood was spent in the outskirts of Kottayam town. During those days the entire region was full of plants and trees. Later, when I relocated to different cities in order to earn a living, those trees came along with me as sweet memories. After a span of 25 years, however, when I looked back, I found that most of the trees had disappeared.

That was why I desired to buy cheap land wherever it was available, and grow as many plants and trees as possible. I eventually bought a part of a water-starved, barren hill at Puliyarakonam in Thiruvananthapuram but growing plants there was not easy. I planted close to 5,000 saplings, continuously through the course of 10 years, but nearly all of them withered away. However, just when I reached the peak of despair, I happened to listen to a TED talk by Mr Shubhendu Sharma. That presentation gave me and my colleagues a sense of direction, and convinced us that if we followed the Miyawaki Model of Afforestation, we would reach our goal. The most attractive aspect of the idea was the assurance that the saplings we planted would grow rapidly and simulate a forest in a matter of three or four years.

The Hindu is a newspaper that constantly publishes articles and news related to environment conservation. But the full-page article on the Miyawaki Model of Afforestation, titled “Fast-forward forests” (“They grow fast and easy but do Miyawaki forests meet the fundamental principles of ecological restoration?” in the online version) that appeared on 3 April 2022, created a bit of concern.

Although the article shares the perspectives of different individuals regarding the Miyawaki Model, it does not end with the writer’s own conclusions on the subject. Rather, he wraps up with the observation by Mr Pradip Krishen that the fundamental principles of the Miyawaki Model are not suited to our ecology. A conclusion that, in all likelihood, will mislead the majority of those who have not fully understood the Miyawaki Model. More than a dozen friends of mine called me up the very same day puzzling over The Hindu article which stated that the Miyawaki Model was not right.

The analogy chosen by Mr Pradip Krishen to reject the Miyawaki Model is actually laughable. “It’s like if you bring a polar bear into your home and you create one room that is full of ice,”  he says. My hunch is that this Pradip Krishen is a filmmaker too. Maybe that is why, when I read his comment, I was reminded of a scene in his film In Which Annie Gives It Those Ones, where the protagonist raises a chicken in a bird cage in his hostel room.

Among the multiple items in his metaphor – a concrete room, ice slabs and a polar bear – only one is a live creature. The Miyawaki Model, on the other hand, is about spreading organic manure on the top soil of an open ground, supplying water, ensuring sunlight, planting saplings of only those plants or trees that are endemic to that region, and allowing them to grow naturally. If the sheer number of saplings planted in a specific area – that is arguably more than usual – is what constitutes artificiality, then, that is the Miyawaki Model’s only artificial component. Yet, don’t we commonly see hundreds of saplings simultaneously sprout under trees like jack, tamarind, mango, hydnocarpus, Spanish cherry, almond, mahogany and others, and the fittest among them survive?

In the article, afforestation activists are grouped under two categories: the Miyawaki followers and the naturalists. I understand the first but cannot figure out what ‘naturalism’ means in the context of afforestation. Forests evolved on the earth naturally over the course of crores of years. So when a self-declared naturalist, even with a maximum of fifty years of work in the field, claims that it is the ‘natural’ process that he/she espouses and follows, I don’t know whether to laugh or cry!

When humans simulate forests, the methods they follow are the same as those adopted in farming. The only difference lies in the intensity of intervention on the earth. But that difference is a significant one. The Fukuoka method, which avoids all forms of ploughing and tilling, is a very important type of agriculture. Isn’t a similar method espoused by the naturalists in their style of afforestation?

One can claim that eating a mango fruit lying on the ground and leaving the seed there itself is natural. But doesn’t collecting fruits or their seeds and scattering them elsewhere become a sowing of sorts? Is this how natural forests evolve? What kind of system is followed when seeds get dropped or excreted by creatures ranging from butterflies to birds, squirrels, civet cats, right up to elephants? Does it become natural when, without the sowing or irrigation, seeds sprout automatically?

There was a tiny temple near the house where I grew up. In its premises was a tree that was more than a hundred years old. It used to be called ‘Madukka’. At its base was the idol of a ‘yakshi’ (young female Nature spirit, usually portrayed as vengeful and blood-thirsty). Perhaps that was the reason why nobody had the courage to chop off the tree. As neither a similar tree was seen anywhere in the vicinity nor the name mentioned by anyone, it was believed that the name was a whimsically chosen one. However, when I went to a resort in Wayanad recently, I spotted a Madukka in a natural forest there. Its common and scientific names were indicated on a display board.

The story of the Madukka can be connected to a memory that the late M. N. Govindan Nair, a prominent lawyer in Kottayam and Aravindan the film director’s father, shared while speaking at a public meeting. During Mr Govindan Nair’s childhood, the Kottayam-Kumili road (K. K. Road) beyond Pambadi was a dense forest, and the places Kanjirappally and Kattappana were forests where tigers and leopards roamed. Today, the area right up to Kumili is a township, and the rest of the region is dedicated to monocrop.

To cite another example, today it is not possible to detect all the plants mentioned in Hortus Malabaricus that was written less than 400 years back.  Most of them have disappeared. Protecting and conserving whatever is left is the need of the hour.

Can anyone tell me how much time is required and what the best way is in order to convert thousands of hectares of land – that had come under acacia mangium cultivation as part of a social afforestation project – into a natural forest by adopting the ‘natural’ method? Even if one were to uproot those trees and set fire to them, the trees have already left behind seeds that will guarantee their continued existence for the next several decades. Should we create in front of our newly constructed houses, gardens with lawns and palms, totally bereft of butterflies and earthworms, or put up a small Miyawaki Model forest with only endemic varieties? Does it go against Nature if we make green islands amidst the concrete heaps, constructed in the name of urbanization, industrialization and so on, that have wiped out the existing biodiversity?

Another subject that requires our serious attention is climate change. We hear that this century will witness an increase in atmospheric temperature – between 1 and 3 degree centigrade – that will trigger rise in sea level which, in turn, will cause a chain of catastrophes, including many harbour cities getting submerged.

Planting trees is the easiest way to combat global warming. Trees store carbon within them.  Besides, they absorb water from the soil, release it into the atmosphere in the form of water vapour and thus cool the air. And the fastest technique of afforestation known to us today is the Miyawaki Method. Another of the special features of a Miyawaki forest is that it can be set up in the smallest of spaces. Are people ‘naturalists’ when they reject this method and instead advise that we wait till forests spring up ‘naturally’? This is almost like denying a bionic leg to an amputee and asking him/her to wait till scientists’ efforts to grow the limb naturally become successful.

The reason for writing this note is to register protest against both the general tenor of the article and the idea it puts forward. The article seems to endorse the claim made by self-styled naturalists that the so-called natural method of afforestation is superior to the Miyawaki Method. That is rich, coming at a time when we are standing at the threshold of climate change!

The critical comments against the Miyawaki Method are varied – dense planting makes it impossible for wild animals to take shelter in a Miyawaki forest; it is very expensive; it does not generate much employment; the plants are misled into growing quickly and so on. Many of these are true.  But there are strong counter-questions too. Is it preposterous to spend somewhere between Rs 300 and Rs 400 per sq. ft on creating a small green oasis amidst the concrete jungles we construct, spending Rs 3,000-4,000 per sq. ft? How long will the insects, butterflies, birds and other small creatures – evicted from their homes as we scoop out greenery from the surface of the earth in the name of construction activities – have to wait and how far will they have to travel to reach a ‘natural’ forest? Which other option do we have in front of us that will guarantee a spread of greenery in the shortest time possible? As far as Nature is concerned, aren’t birds, butterflies, earthworms and micro-organisms in the soil as important as bison and bears?

We have to undertake more comparative studies. Not between Miyawaki forests and natural ones that evolve through centuries. Rather, between Miyawaki forests and the artificially created forests of the naturalists. The logic of the conclusions drawn by Prof. Miyawaki that led to the creation of the Miyawaki Model has not been challenged so far. How can his model be faulted merely because some of his followers commit mistakes?

The Miyawaki Method is used not to ‘create’ a natural forest but only to ‘simulate’ one. And in order to execute it, Prof. Miyawaki himself recommends at least 1,000 sq. ft of land. No one claims that these forests will get transformed into natural ones and provide havens for tigers, wild boars, elephants and leopards. The small Miyawaki forests serve to preserve biodiversity in just the same manner as our kaavus [sacred groves] do, and should be seen as distinct from their bigger counterparts. If people, caught in the rat race of urbanization seek to put up a Miyawaki forest in their four- or five-cent plot, that effort has to be encouraged because, at the very least, water will sink into the soil within that tiny patch of land, provide some space for earthworms, and create a tiny sanctuary for butterflies and glowworms. Even if one were to take the naturalists’ criticisms against the Miyawaki Method at face value, what ‘natural’ solution is on offer to solve the problem raised in the above-mentioned example?

The Hindu article by Nikhil Eapen 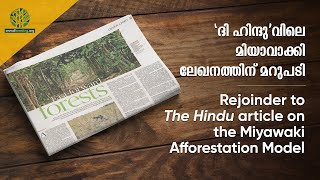 Rejoinder to The Hindu Article on Miyawaki They grow fast and easy but do Miyawaki forests meet ...